Ghosts of Parents Past

I’ve found, as I would assume any parent who has been a parent for more than two minutes has also found, that the highs and lows of parenting swing drastically and dramatically. Within the span of a couple of minutes I find myself holding my little people in my arms smugly smelling their sweet heads, and mere moments later I am having an out of body experience where those same little people are attempting to claw one another’s eyes out and their shrill voices literally leave my ears ringing.

I love them, dear God I love them beyond all reason- but this crazy pendulum swing of parenting…sometimes I feel like one of those old cartoons where the character takes off and his clothes are still standing there, suspended in the air. I’m those clothes, two steps behind whatever emotion my child has bolted onto next.

One such experience happened, quite unfortunately, on a very small plane this past weekend. My younger brother got married-and that was lovely, and we are all very excited to welcome my new sis-in-law to the family- but the travel was far so we decided to split it up and take both a plane and a rental car to reach our destination. The journey there was relatively uneventful (save some threats of vomit from Gracie) and we arrived unscathed.

Neither child napped on the car trip to the airport on the way home so I was elated when Sam immediately fell asleep in my arms upon take off. I glanced over at Gracie was happily playing on her iPad. Right here. Here is where I smiled over their heads at my husband. “Let’s order a drink” I mouthed. I took a selfie. A SELFIE. That’s right…I got cocky.

Our drinks were delivered. Gracie ordered apple juice. I watched as the flight attendant filled the juice cup to the brim, attempting to stop her but decided to be the “fun mom “ (remember how that worked out on the day I let them dress as elves?) and let it go.

No sooner had a cracked open the can of my $10 airplane beer when Samuel woke up.

Sam is an easygoing kid. By far the calmer of my two. But, occasionally, when he wakes from his nap he embodies what I think is what people are referring to when they say, “Don’t poke the bear”. To say he roared to life would be an understatement.

You could almost feel everyone in the tiny plane tense.

I jumped up so hard I hit my head on the overhead bin. Sam’s foot shot out and knocked over Gracie’s entire cup of juice, soaking her book bag and iPad. She began to wail.

Parke offered up Sam’s juice cup (to help his ears). Sam threw back his head, also cracking it against the overhead bin.

The flight attendant came over, asked Sam if she could hold him- rage doesn’t really describe his response.

You always turn on your allies in stressful situations.

Parke settles down with Gracie (and drinks my beer…which I sort of deserved) while I walk Sam up and down the teeny aisle, kicking heads right and left while he wails.

Why I wore wedge sandals I will never know.

We dodge at least ten people headed towards the restroom- I curse their small bladders on the hour long flight (go before you come people).

Finally, finally, finally…we are to “prepare for landing”…Sam flings himself wildly about until we bump to the ground at which point he pops up and smiles at the lady he nearly maimed earlier.

He calls out cheerful “bye, byes” to anyone he can make eye contact with.

The four of us stumble off of the plane, Parke and I like soldiers out of battle and Sam and Gracie running ahead, bobbing and weaving and laughing hysterically.

Somewhere, there is a little ghost of us still on that plane, getting ready to cheers over the head of our sleeping toddler. 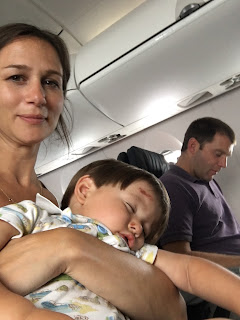