I've said time and again on this blog that I have always been a "happy girl" aka, an optimist. And I've said how hard it was to be that girl after Rip died.

I know the expression, "hope for the best, expect the worst and you'll never be disappointed". It makes sense, kind of. But I just don't operate that way. I'm more of the "think of the absolute best (probably never gonna happen) scenario and day dream about it until it doesn't happen". And yeah, maybe I get disappointed but usually not for long...by then I'm already on to the next great thing that's going to happen any minute.

It was really hard believing that after Rip died and when I got pregnant with Gracie. Really hard. Even with my perfect, beautiful baby girl it was hard. I wanted to believe the best again soooo badly. But it was hard.

This year, for our anniversary, Parke and I went back to Tortola-our home away from home. The last time we were there was when our wonderful, thoughtful friends sent us after we lost Rip. It was amazing how healing it was to go back. How different we are today than we were then. Parke was like a little kid.

Before we left, I'd made up my mind I would be pregnant by the time I got back. This is the kind of thing I do, only to make up my mind again the next month. Nonetheless, I bought a pregnancy test and left it for our return.

We got in the car and the song "He Called Me Baby" came on the radio. The same song I heard when I  knew I was pregnant with Rip. You can imagine what was going through my head.

Unfortunately, by the time we reached paradise, it became quite clear that I was not pregnant. Like, the exact thing you DON'T want happening on your romantic beach vacation had happened. To make matters worse, I was completely unprepared for this unwanted visitor (optimist remember) and all the resort had to offer resembled what I was given to wear by the hospital after the birth of my children. Awesome.

Still, we had a wonderful vacation. Really, really good. And the whole time that same song played in my head, and I thought "Maybe??". And I had to smile, because the Old Anne was back. Here in this beautiful place, I felt like I'd found that Happy Girl again. The one who still believes even when EVERYTHING point to the contrary- like basically wearing a diaper in her bathing suit contrary. I'd missed her,  a lot.

The last day or our vacation Parke came and grabbed me to show me this: 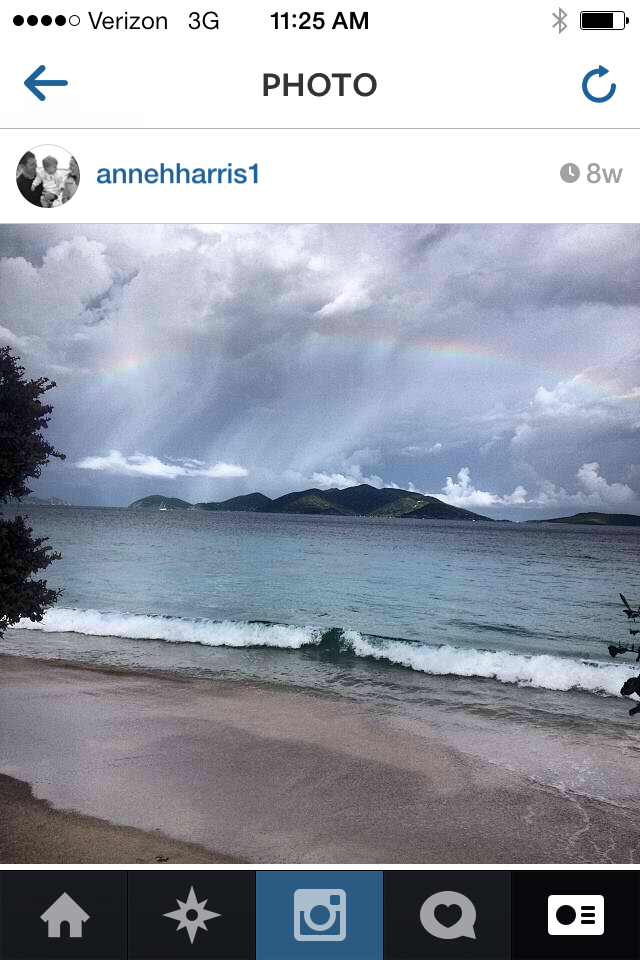 So, of course I took the darn test when we got home (I'd paid for it, right? Also, patience is sooooo not my thing).

We are expecting our third child in early August.

And of course I have that voice in my head..."but Anne, what if you write this and then something happens again?!!" So what? The joy I have over the baby is not something I am willing to sacrifice to fear. Not this time.

I haven't written on this blog in almost two months...which I think is the longest time I've ever gone without saying SOMETHING. I've thought about writing a million somethings, but those thoughts usually occur somewhere around 3 am when I am in crazy "see what I can dig up to worry about" mode.

After Rip died, I felt compelled to write. That's not a strong enough word...it was almost like if I didn't write what was in my head that very minute whatever it was would become too big for me to deal with. Writing was a lifeline.

Writing also became a part of me, something I will always be thankful for. I still write, in fact I'm writing for a couple of local publications on the side now, and I truly enjoy it. But that need to put everything on paper seems to have faded.

I guess my life seems pretty normal right now. Almost everything I do is stuff that every other mom I know is doing. There isn't a reason to get it out here because nobody understands it out there.

Don't get me wrong, I'm still different. I still feel my heart sink when somebody says "wait til you have two!" It will always catch me off guard when someone asks how many children I have. I will always have days when I cry because I miss my baby boy.

Most of the time I feel love. And I feel loved...by God, by my husband, by my friends, by my drama queen of a two year old. That love doesn't look a darn thing like I thought it would four years ago, but it is fought-for love...and that's the best kind.

I am happy. I never in a million years thought I would be. Could be. Its kind of a miracle, really.

Now, this is not to say every day is peace, love, and happiness. Peace is generally not having your two year old smack your face and make a big production over saying sorry. Love is not always having your husband fuss over the new scratches on your car for thirty minutes (its not like I do this stuff on purpose). Happiness is rarely found while cleaning out a crock pot a solid three weeks after making a roast. No, that's all called yesterday.

That's also called normal. Sometimes normal can be even better than peace, love, and happiness.
Posted by Anne at 11:29 AM 3 comments: