The past weekend was as close to perfect for an eighteen month old as it gets in my books.

Friday night, Gracie went out to dinner at one of her favorite restaurants (it has real, live fish!) with her parents, grandmother, and uncle.  Afterwards, she got ice cream and got to run around with chocolate all over her face until well past her bedtime.

Saturday, her daddy took her to the beach with friends in the morning while her mama attended a baby shower.  Later, she went on a trip to get a new car seat with her mama and her daddy.  She then took a two and a half hour nap in her old car seat (in the cool, air conditioned house) while her mama and daddy sweated themselves to death installing her new car seat.  Rested and fresh as a daisy, off she went to a cookout at her best buds house where she ran around in the warm summer night with other laughing, screaming kids until they could literally no longer keep their eyes open.

Sunday morning brought doughnuts (Publix rivals Krispy Kreme y'all, no joke) and another trip to the beach with just Mama and Daddy.  Another nap, a walk around the neighborhood, some bubbles in the front yard and a dinner that involved mac and cheese rounded out the day.

This all just makes me so, so happy on many levels.  Getting to the deepest one, when we lost Rip and I got pregnant with Gracie I was so worried about what kind of childhood she would have...would she grow up in a house of sadness?  Moving up a level, as a working mom, I always wonder if Gracie is missing something by my not being with her all day every day. On the surface level, what about all those worries we have as adults...the bills to pay, the doctors appointments to book, the little things that take up waaay too much head space, are they somehow going to take away from the carefree childhood  that Gracie deserves?

But looking back on this weekend, I realized that I can stop (or at least try to stop) worrying about those things.  All of those great memories I have from my childhood, those summer nights where I stayed up too late shrieking with laughter in somebody's backyard, those are the same memories that Gracie will have, too. I'm sure of it.

And what's more, despite the fact that as an adult you don't have quite the same carefree-ness you did as a child...well, you get to drink wine and laugh with your friends while your kids run around in the backyard.  I woke up with a smile on my face Monday morning, wishing I could bottle up the whole weekend.  It's not always this good, but when it is... it can be pretty great.
Posted by Anne at 9:18 AM No comments:


But it was sooooo worth the wait. 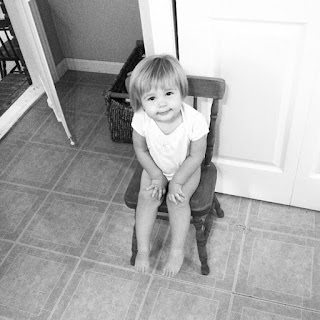 I read a book this week that I would HIGHLY recommend.  It's called What Happy People Know by Dan Baker (Ph.D)...the author just so happened to have lost an infant son, which of course made it more relatable to me, but regardless the whole book was one of those where I had my pen out the whole time and ended up underlining half of every page.

There was one quote that got me good.

"Sometimes when our minds and bodies are shattered by life, it's only the spirit that can knit us whole and keep us alive."

As soon as I ready those words I got a huge lump in my throat and and had to blink back tears for the better part of a minute.  I just knew what he was talking about.

The other day, I was with my friend Sarah.  Sarah has been through more in the past few years than most people go through in a lifetime.  She lost her mom, lost her daughter, had another pregnancy loss...so the other day, when Sarah casually said, "I think I am a fairly resilient person", I busted out laughing.  I would say that is the understatement of the century.  Sarah has more spirit in her pinkie finger than some have in their whole bodies.  In fact, that is true of most of the Baby Loss Mamas that I've met.

The image that quote brought back to me was just a flash.  A flash of standing in the shower, water streaming down on a broken body with a baby no longer inside of it and no baby to hold on to.  A flash of a mind blank with grief.  A flash of a girl whose happy life had been shattered.  And yet, in that flash  there was a little curl of fight.  That little something that kept her holding on.  That told her it was time to start again.

Whether it be holy or human, thank God for the spirit.
Posted by Anne at 9:05 AM 3 comments: