I hit a low Saturday night.

In my defense, I was recovering from the stomach bug...
An aside here...before I got pregnant with Rip, I was on a solid 19 year streak without a single stomach ailment.  Ever seen that episode of Seinfeld?  Yeah, that was me...now I've had five in the past two years.  My, how the mighty have fallen.  I digress...
It had been raining for 72 hours solid, and some other things that fall under the category of "not fit for internet consumption" were going on.

I was sick, weepy, and I'd had it with the whole world.

By Sunday, the sun was up and my head was out of the toilet, unfortunately my attitude stayed where my head previously resided.

I ventured out into the world, crappy attitude and crying toddler in tow, to the grocery store.  Keeping Gracie happy and my list checked off distracted me enough to have a little clearer mind when I got back in the car.

What came to that clearer mind went something like this..."So what if life isn't going exactly how you planned?  So what if "things not fit for internet consumption" aren't going exactly the way you want them to?  Are you going to have a miserable life because of it?  Is that what you want Gracie to see?  A mom who droops around all of the time because life is hard? Here is how this is gonna go down..You CAN be Happy and You WILL be Happy."

I'm not sure if that voice of reason came from things I have learned over the years, or maybe it was my mom (who is known to give some pretty sassy advice)...but I think it was probably just God saying "Girl, please".

When we got home, I opened the doors and windows and turned the music on as loud as I could.

When God says "Girl, please" you best listen.  I CAN be happy, and I darn well WILL be happy.

I tend to hold on too tightly.  To things, people, you name it.

I am also not particularly adept when it comes to technology.

And I am really impulsive.

These three things proved to be a nasty combination earlier today when I wiped out about 100 emails I've been hanging on to for the past two years in one fell swoop of impulsiveness/I wonder if I can't take more pictures on my phone because it is full of emails.

See, I thought that if I deleted the emails from my phone, they would still be on my computer.  I was wrong.  They are also no longer in my trash.  Two years of emails...emails of desperation to anyone and everyone after Rip died, emails written in fear when we found out we were expecting again, emails  of joy when Gracie arrived.  At first, I could't believe what I'd done.

But, before you write to tell me how I could get those emails back (and I am sure there is some super tech-y fix to this problem), once I sat for a minute and stared at the white space on my computer I actually breathed a little sigh of relief.  I lived those emails, the memories are still there, but it's kind of nice not to have them staring me in the face all of the time.  Maybe it's good to start fresh every now and then?

I hold on tight...it's what I do.  But maybe accidentally throwing two year's worth of some pretty emotional emails into cyberspace isn't the end of the world.  Maybe choosing what to hold on to, or not, makes what we are left with mean that much more.
Posted by Anne at 2:59 PM No comments:

Those are HUGE milestones in any kids life, but if there ever comes a time that Gracie wants to read this blog, I want her to know just how much she is loved and what an answer to a prayer she is.  Yes, I want this blog to document Rip's life and how he shaped our family, but that goes for Gracie and whoever else comes along too.

What brought all of this on you ask? You didn't, but I will answer anyway.  A craving for hot chocolate that brought back a long forgotten memory.

When I was pregnant with Gracie I lived in constant...fear is probably too light of a word...total terror is probably more accurate...that something would happen to her before I got to hold her in my arms.  Losing Rip taught me how precious every second we have with our children truly is. I still believe that, not in a morbid way, but in a children really are miracles kind of way.

Anyway, my doctors tried to ease my constant anxiety with weekly non-stress tests.  Whoever named those things clearly never had one.  I get that they are not supposed to put any stress on the baby, but I was sweating bullets.  The deal is that you get to listen to the heartbeat, see if you are having any contractions, and the baby is supposed to move a certain amount of times in fifteen minutes.    The first week there were four of us lined up, huge bellies out, watching what somebody's idea of a cruel joke...a birthing movie.  Ten minutes in guess whose baby hadn't moved yet?

Eventually, after being "buzzed" (they actually put a large buzzer to your stomach and for all intent and purposes scare the baby half out of his or her mind), she moved...but I spent the next week convinced something was wrong.  So I took matters into my own hands.  From then on, each week on the way to my appointment, I stopped at Starbucks for a tall hot chocolate.  The kid never failed a test again and neither of us was in the least bit stressed (or buzzed off of anything except chocolate).

So today I had a random craving and stopped for some hot chocolate.  All of the sudden, those feelings came rushing back..  All of that fear and yearning for my baby girl and wondering if she was ever, ever going to be in my arms...just all of it.  And now she is here, and it was so worth it.

I want to make sure that she knows that, and her whole little life is documented here right along with her brother's.  More Gracie to come (who, by the way, loves anything chocolate...hot or not.)
Posted by Anne at 8:43 PM 2 comments: 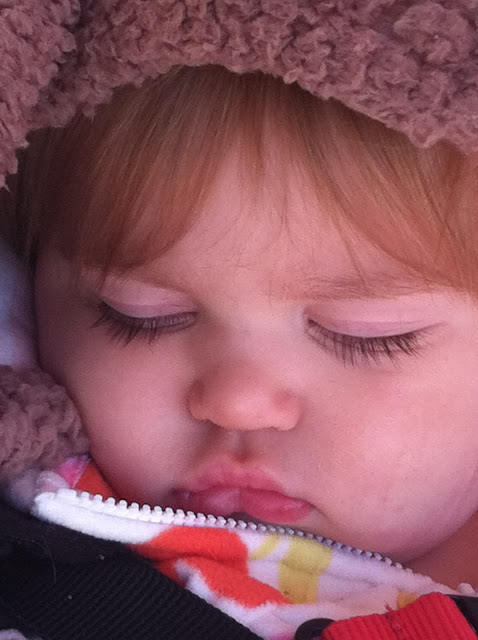 Circumstances and situations do color life , but you have been given the mind to choose what the color will be. ''-John Homer Miller

I've learned that a lot of healing, at least for me, is learning to let go.  That can be tricky, because of course I want to hang on to every aspect of Rip that I can...but do I really?  More often than not, the tendency is to let my mind "go there", back to the worst possible memories.  Memories that really aren't serving anyone any good.

I can't do anything about what happened to Rip, those memories are mine, fair and square, but when they come it is my choice (now, at least) whether or not to "go down the rabbit hole" and indulge in hours of unhealthy thinking.  Wouldn't it be much healthier to remember the wonderful, good things associated with my baby boy? There are plenty of good memories.  And it certainly would make his memory and legacy to this world more in line with what I hoped it would be.

And poor old Gracie...the other day I realized how often I say things to her like "Be careful!" and "Watch out!"  Luckily, she is at the age now where she just busts right ahead and does whatever she wants, but I don't want her to grow up afraid.  Sure, it is my job to use common sense and keep her safe, but the other night I was up for an hour at 3 am worrying about the fact that Gracie can't swim and could drown.  3am.  Middle of the night.  In February.  You know what color that is?  The nastiest shade of putrid green created out of past circumstance, bad memories, and fear.

Neither of my kids deserve a putrid green world.  Not when there are so many other lovely colors out there to choose from.  So I am really trying to color my world, and theirs, a little more carefully these days. 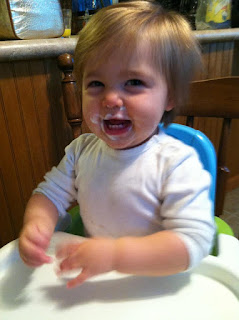 A girl who deserves a hot pink world

I have been in several situations lately where people were talking about baby sign language.

This is not something that we have done with Gracie, mainly because it's not something they do at her school and it didn't really occur to me to try it out at home.  I think as a mom, and maybe especially a working mom, you are always slightly on edge about something other children may be doing that your child is not...so just for curiosity's sake I checked out the top ten most common baby signs.

The first grouping listed was for Mommy, Daddy, and family pets.  Gracie has this one down...sort of. She will forcefully say "DOG" or "KITTY CAT" when said pet walks into the room, but does not yet say Mama or Daddy.  She prefers to holler at whomever she wants until that parent turns around and then she demands to be picked up.  Probably not the sign they were talking about, but effective nonetheless.

The second group was for food.  Milk, Food, More, and All Done.  Gracie has recently learned to shake her head yes and no.  Let's just say that leaves little to the imagination as to what she does and does not want.  She also knows where certain foods are kept.  Bananas on top of the fridge....annnddd her cookies in a drawer near the sink.  A lot of grunting and pointing and rocking whomever is holding her towards to the direction of the food she wants usually results in the appropriate snack (and I promise it is most often a banana).  As for more, the indignant look on her face when the last piece of cheese toast is gone is a pretty good indication that more food is required.  And for all done...the resounding sound of a sippy cup hitting the floor and exploding gets the point across pretty well.

The final group was experiences and feelings.  The first being a dirty diaper.  Let's just say I've never really felt we needed a sign for this one.  The second is book.  Gracie LOVES books.  She especially loves books about kitty cats.  She will let you know she would like to read books about kitty cats by hurling the book at you and shouting "KITTY CAT!" at the top of her lungs.

The final sign listed was I love you.  Again, we have no formal sign from Gracie that says she loves us...but lately she will crawl into our laps and wrap her little arms around our necks and bury her head into ours and just leave it there for a while.  Message received.

So this is one mommy guilt-trip where I'm going to let myself off the hook.   I saw the sign.